SKY MAPPERS – the race to collect constellations in ancient Greece

Sky Mappers is currently seeking a publisher. Want to know more about it? Contact me at your convenience!

In the Sky Mappers card game, players are astronomers racing to record their constellations and other discoveries they spy in the night sky. Each turn a player has a hand of cards, and with it they choose to: 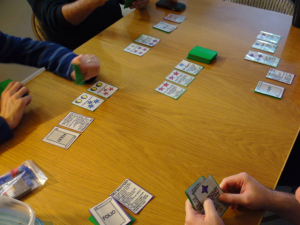 As soon as a player completes a Constellation, they reveal or claim the Constellation card, and collect all the corresponding Star Cards from their Sky Field into a Constellation stack. This is kept until the end of the game, when Final Scoring takes place.

The game ends after a final round when there are no cards left to draw. Players then count up the Stars in their Constellations as well as the Discoveries in their Folio. Whichever player has the most points wins the game!

WILL THIS GAME SELL? YES!

SKY MAPPERS is currently seeking a publisher, and is making the rounds at local game conventions. See Sky Mappers at UNPUB 2016 this coming Spring!