BONUS LETTER is a quick-to-learn, quick-to-make word game that uses one custom-labeled six-sided dice. Those with the most extensive vocabulary will do better.

The object of the game is to score the most points before the end of it. Players earn points by spelling out words that contain the BONUS LETTER one or more times. The game can last for a set number of turns, or it can last until the alphabet is exhausted. Anywhere from one to more players can play, from ages 8 and up (I suppose). 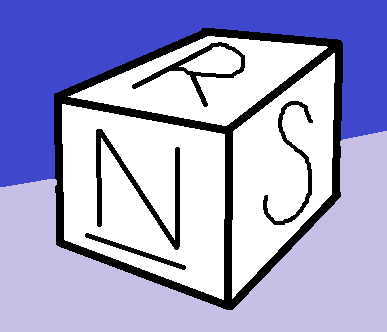 SETUP
To play BONUS LETTER, you will need:

On your note pad, write all 26 letters of the alphabet. In a separate area, write each player’s name and leave a little space near each (this will be where score is recorded).

HOW TO PLAY
Whomever has their birthday coming up next plays first.

On their turn, players roll the die. Whichever letter comes up is their BONUS LETTER for that turn.

It’s then the next player’s turn.

The game is over when there aren’t enough letters remaining in the alphabet for players to all have another turn (like if there are five players and there’s only one letter left), after a set number of turns, or when players come to agreement that there is no word possible from the remaining alphabet that contains the current BONUS LETTER (in which case the game ends prematurely). Whichever player has the highest score at the end of the game wins.

EXAMPLE GAMEPLAY
Annie, Beth, and Maria are playing. Annie is the first player.

Beth goes next. She rolls “E.” Looking to the alphabet, she chooses the letter H and the word HEATSEEKER. Since this word has the letter E in it four times, she earns 13 points and then scratches out the letter H.

Maria is third. She rolls”T.” Not able to choose A or H, Maria selects the letter F and the word FURTHEST. Maria earns 5 points and scratches out the letter F on the alphabet.

Annie rolls “L.” She can’t spell FALAFEL since F is already chosen, so she selects the letter P for PARALLEL. Annie nets 8 additional points and scratches out the letter P on the alphabet.

Beth rolls “R” on the BONUS LETTER die. With the letter W she spells WARRIOR. That nets her 8 points, and she scratches out W.

Maria rolls “R” as well, and selects the letter I for IRRADIATOR. Annie challenges this, saying she’s never heard of the word. The players spend a moment looking for IRRADIATOR in the nearby dictionary, and much to her surprise, it’s in there: a noun related to IRRADIATE. Maria earns 8 points on her turn.

…Play continues until the players run out of letters to finish a round. In this case, each player will have up to 8 chances to spell words, and there will be two unused letters in their alphabet list.