Thanks once again to Reiner Knizia’s excellent book Dice Games Properly Explained, I came up with a mini-game called Three Chances. It’s a simple roll-and-move game for two players that toys with probability, and works well as a sandbox for other game ideas that may come along to you.

You can also click on the picture below for a larger version: 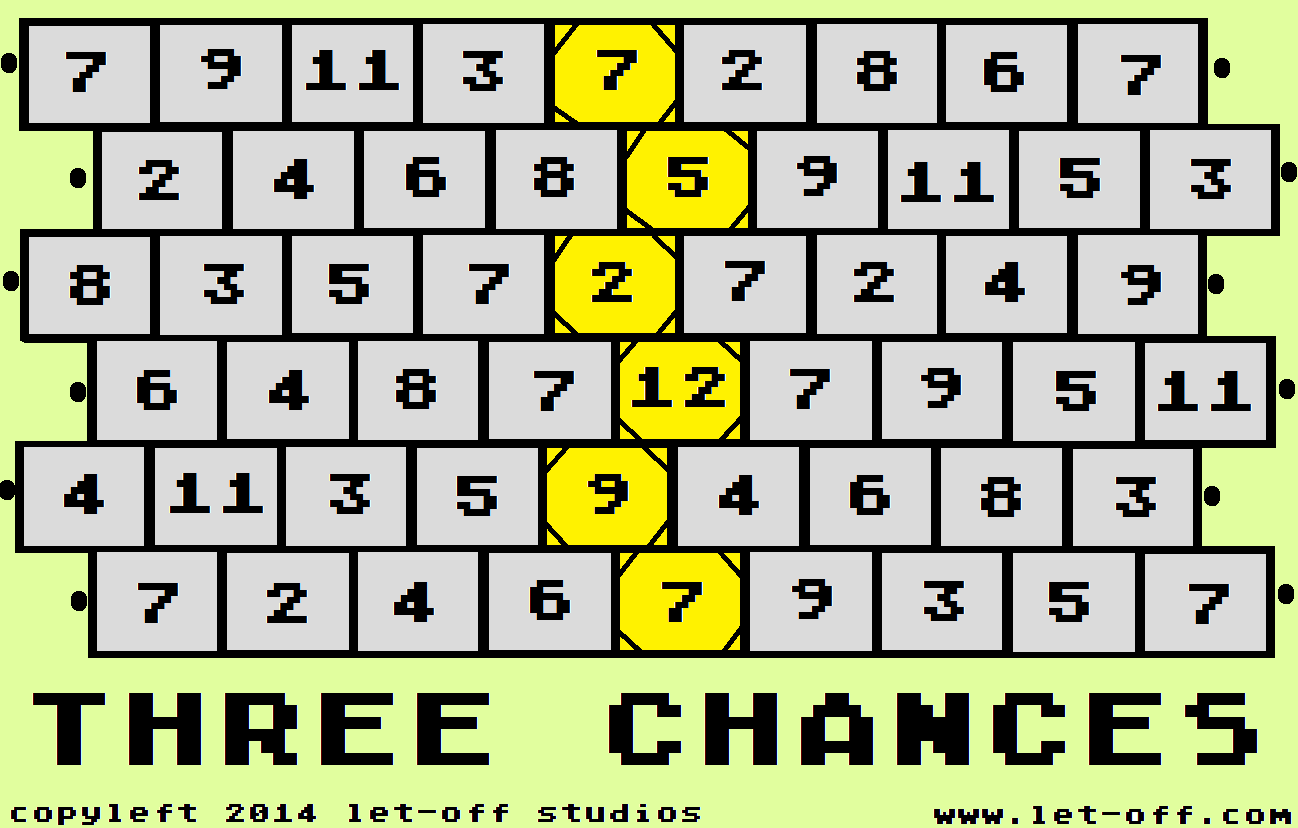 (you can easily use two different types of coins: six of each. The squares on the game board may be large enough.)

The object of the game is to move at least three of your pawns to the yellow, marked Score Spaces at the center. The players do this by moving their pawns one space at a time from the left and right outside edges towards these Score Spaces. Players roll dice to determine which spaces can be moved into on their turn. Depending on the results of their roll, they have Three Chances to move towards the Score Spots.

For example, Ellen rolls the two dice and her results are 2-5. She can take one of her pawns and place it on the board at one of the spaces marked 2, 5, or 7.

I enjoy thinking about probability, and this game came from that. I wanted to give players opportunities to move around a board, but without a particular path so as to avoid the mental numbness of typical roll-and-move games. Players move only one space at a time, have multiple pawns to use, and multiple end points. Blocking is possible as well, considering there’s nowhere in the rules that states players MUST start from a particular side of the board, apart from left or right.

My first draft of this board was completely arbitrary, being loosely based around having even on one side, odd on the other. But with a revision I rearranged the numbers so that 7s were more prevalent on either side, and there was a chance to have an even or odd result occur anywhere, maximizing player options. I also modified which numbers were at the Score Spots. After initial playtesting I realized that always requiring the player to calculate the sum would leave them with many passed turns, so I opened up the options to those results from a single dice – and thus, the name of the game came about. With one roll, there are three possible options for the player.

Even numbers are more common, considering sums. But why is it then that the sum of 7 is the most probable result of the bunch? AND why is 7 so common when the two dice used have even numbers of sides? It’s curious, even when the mathematics of probability can explain it. I assume that it’s somehow more likely to roll a combination of one odd and one even number generally.

I don’t use the number 10 for some reason. The good news is that there’s just as much (and even better) a chance of rolling a 4 as there is a 10, at least when rolling two dice. If you consider the two chances of rolling a 4 on a single dice, then rolling a 10 is less probable (or even less possible) than rolling a 4, since the highest number on a typical 6-sided dice is 6…Thinking you can roll a 10 with one of those is just silly.

For a 12, you must roll a 6 on one dice and must roll 6 on the other. However, if you want a result of 1 available, all you need to do is roll a 1 on one of the dice. The other dice can be any result. That increases the odds of rolling and using a 1 considerably, especially in comparison to rolling a sum of 12.

Granted, I only use one 12 on the board, but still… This is likely an artifact of an earlier revision (where I ruled that players must use sums, and not the results from a single dice). 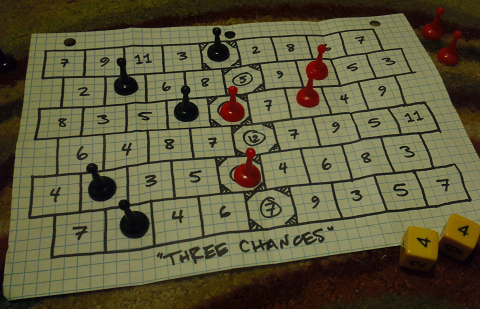