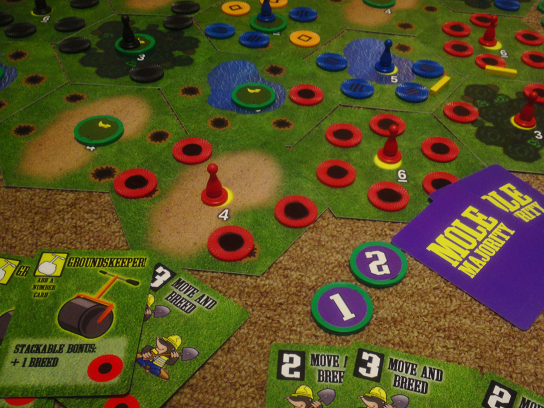 Mole Majority is a card-driven, area-control game featuring intense hand-management and territory dynamics. Players guide a tribe of moles in their efforts to overrun a golf course, represented by a modular hex-based tile layout. The game starts off pleasantly enough, but as the game continues spaces become crowded with moles and only players with a majority of moles in a given hex will win that territory. Hand management, timing, attention to other players’ turns, and a willingness to be ruthless on more than one occasion will help a player claim the golf course, and take the victory.

Seasoned players will be able to maximize their effectiveness on a turn by exploiting the nuance of two specific mechanics: increasing their underground “network,” and claiming Majority within a hex. Additionally, cards can work together by combining “stackable” cards that provide additional actions. To gain an edge, players can renovate hexes by Making a Home or causing a Cave-In: maneuvers that help them gain additional points that are kept secret until final scoring. The end result is a multiplayer game that provides continued strategic depth and a tense end-game where players don’t know exactly who will win when the final hex is claimed.

I’m experimenting with documenting my tabletop game design process on the superb Board Game Designer’s Forum. Mole Majority is my entry into this documentation trial.

To see my entries for Mole Majority, you’ll want to see the game journal itself.