Make 10 is a card game for two to four players. All that is required is a normal deck of cards.

Summary of Play: each player has a deck of ten number cards, each with the same suit. On their turn, players place a card from their hand of three next to one of up to four available face cards in an effort to out-bid their opponents. If a player places a card that “makes 10” when added to the numbers of all the other surrounding cards, then they may place another card from their hand on the same turn. When a face card is surrounded on all four sides by number cards, the player with the highest bid surrounding the face card takes it, all number cards are returned to their respective owners in a discard pile, and the next face card is turned face-up. Once all face cards are claimed by players, then the player with the highest number of points wins.

Separate the deck of cards into five piles: face cards, Hearts, Spades, Clubs, and Diamonds. The Jokers are not used in this game and should be set aside. Each player should take one suit pile and shuffle it. This pile should have 10 cards in it. 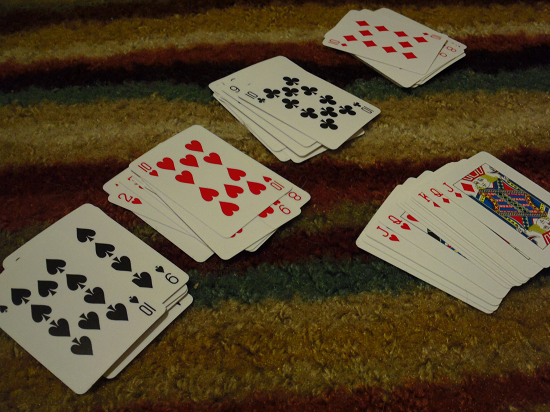 Deal the face cards into four piles of three cards each, and arrange them on the table with space between each of them. 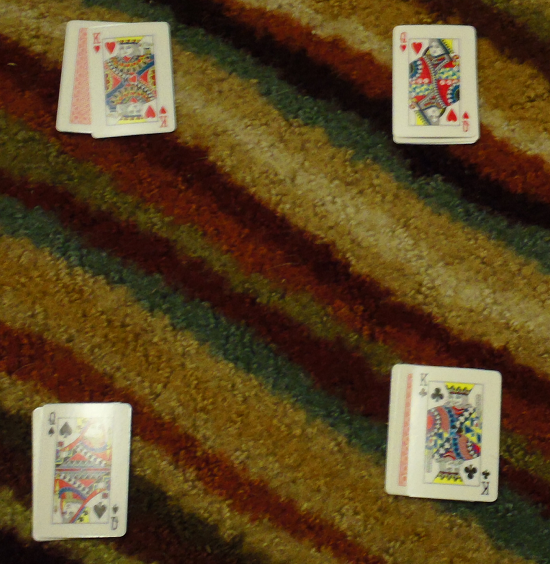 Each player draws a hand of three cards from their draw pile. 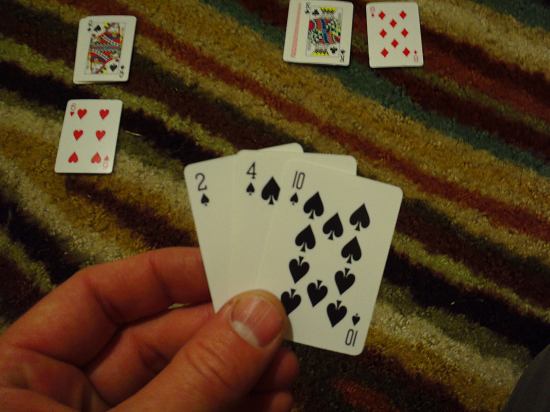 Whomsoever has the next birthday goes first, and play continues clockwise. On a player’s turn, they must place one card in an available spot next to one of the face-up face cards on the table: up, down, left, or right. This is a “bid” in an effort to have the highest sum of their own cards surrounding that face card. The player then draws cards from their Draw Pile up to a hand of three cards.

Note that in this game, Aces count as 1 for the purposes of bidding. 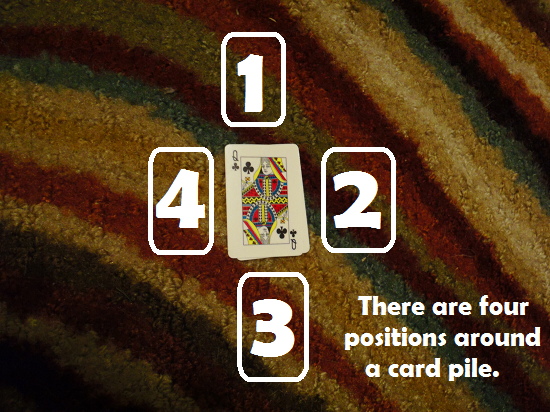 The next player in turn order places their own card, and soon each player will have played at least one card. Here’s an example of what the table may look like in a game after that first turn. 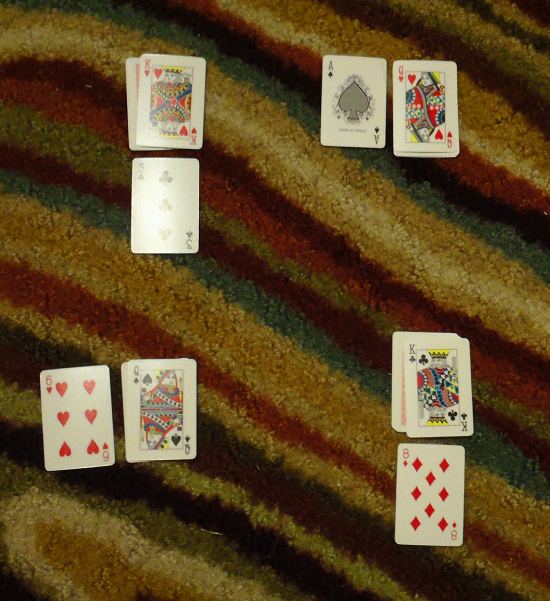 Play continues clockwise until a face card has a number card in each of its four positions: up, down, left, and right. 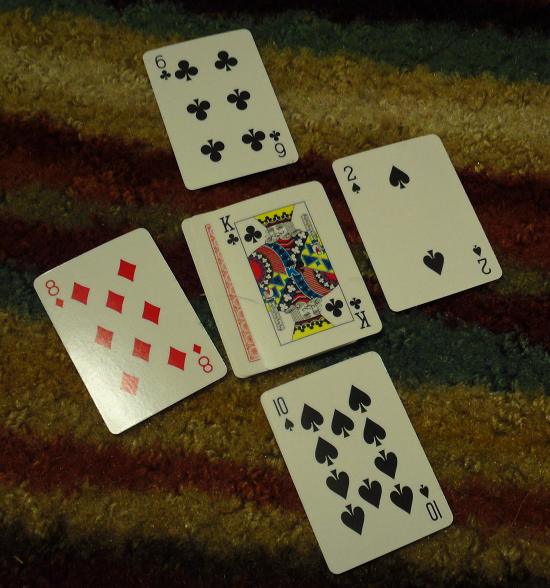 Once a face card is surrounded, play stops for a moment. The player with the highest bid (sum of the numbers on their own cards) surrounding a face card “wins” that card. That winner takes the face card and puts it in their Point Pile, and all players collect any number cards used to surround that face card.

In this example, Spades has won with a bid of 12. They collect the King as well as their 10 and 2. Diamonds takes their 8, and Clubs takes their 6. All number cards are put face-up in their respective players’ Discard Pile. 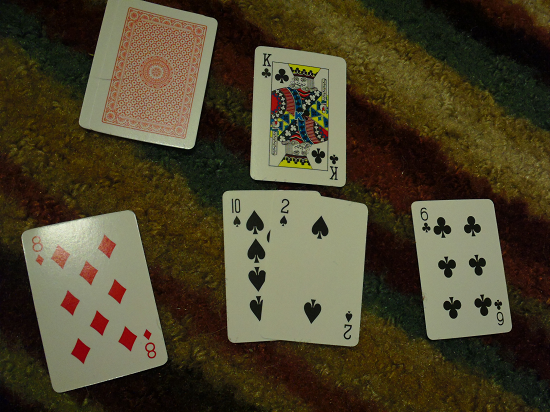 Once the face card is claimed, the next face card in that pile is flipped face-up, and play continues with the next player in turn order. 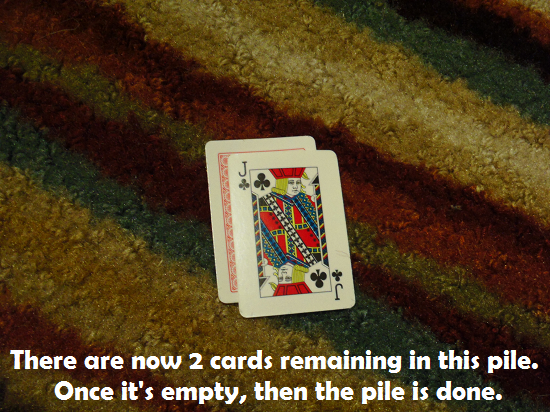 Here’s an example of what the game table will look like after a face card is claimed. The new face card – the Jack of Clubs – is not surrounded by a number card on any side. 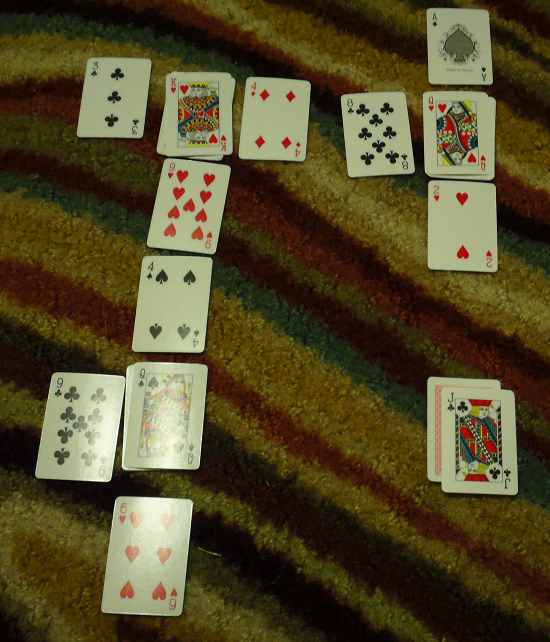 WHEN A PLAYER MUST RESHUFFLE

If a player runs out of cards in their Draw Pile, she must momentarily set her hand aside, shuffle their Discard Pile, and make that their new Draw Pile. She can then draw up to a hand of three cards.

For example, if a player places a 4 next to a face card that already has a 6 next to it, she has just Made 10, and may place another card from her hand on the table if she wants. 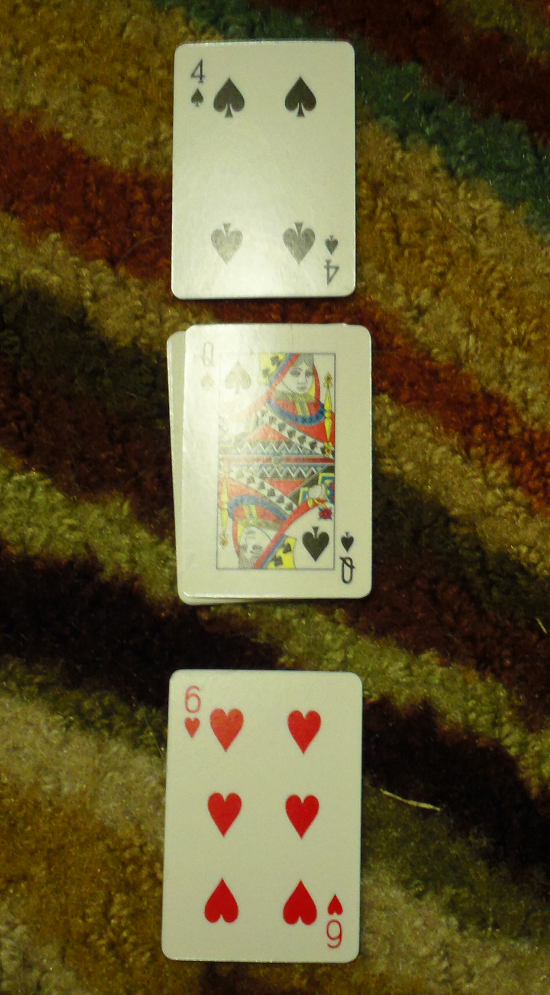 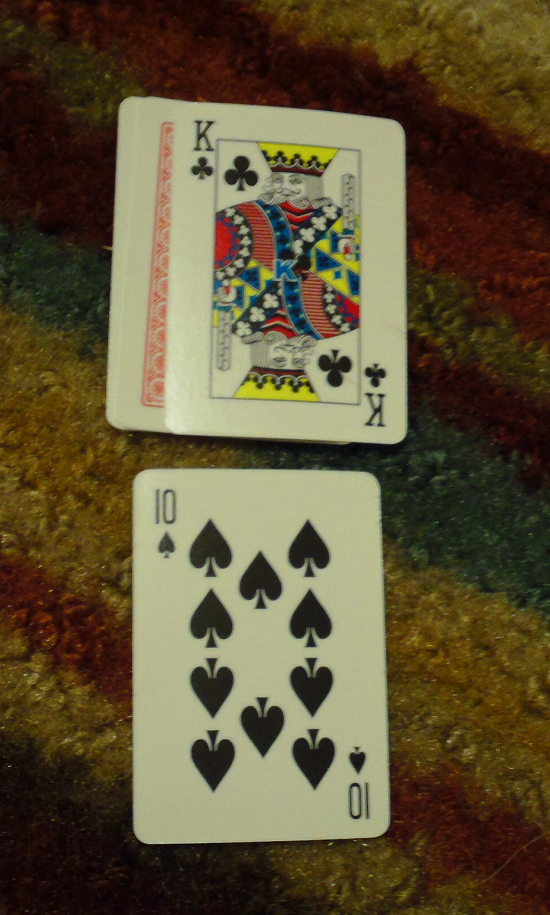 …or place it next to a face card with which they or someone else has already Made 10. 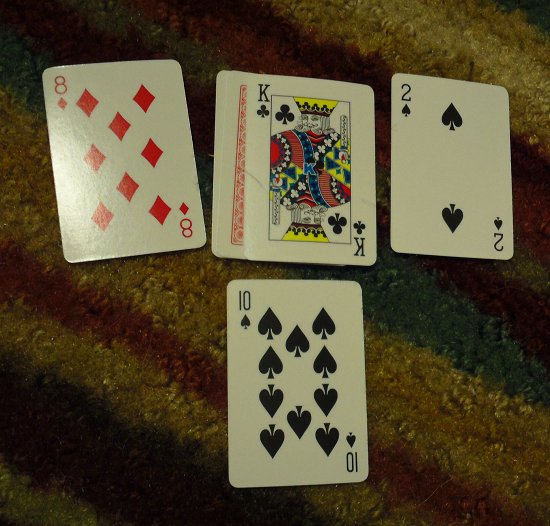 In this way, a player can Make 10 more than once on her turn. But remember: a player may NOT draw cards until the end of her turn. This prevents a “runaway” player from constantly playing more and more cards on their turn.

Play continues until there are no face cards remaining. At that time, players count up the cards in their Point Pile. Jacks are worth 1 point, Queens are worth 2 points, and Kings are worth 3 points. The player with the most points wins the game! 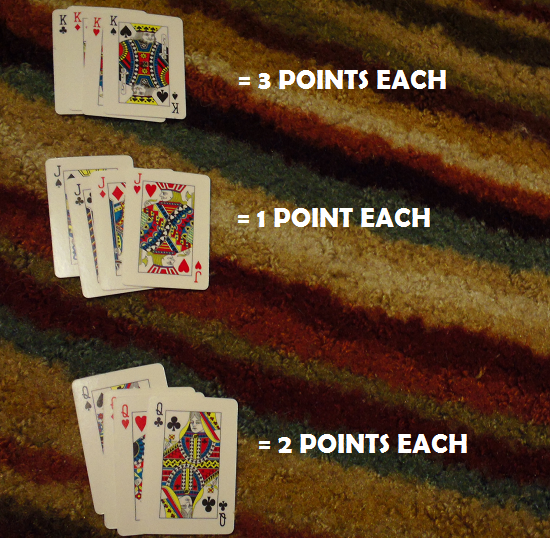 Here’s an example of a workable player card layout: hand is to the left, and to the right is the Discard Pile, Draw Pile, and Point Pile. 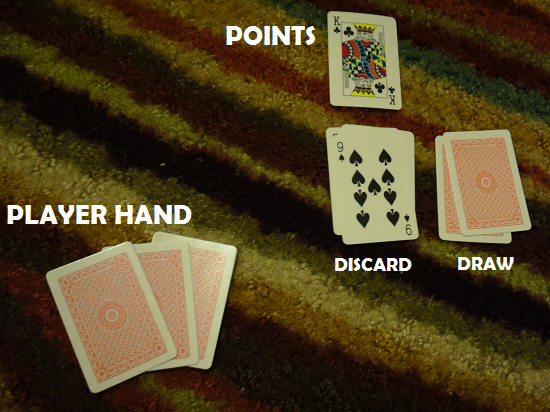 If a number card is placed and more than one player ties for the highest bid, then ties must be resolved. If the player who “closed” the card is tied for the highest, bid, then they take the face card. If not them, then go to the next player in clockwise order.

If more than one player is tied for the highest score at the end of the game, then each tied player shuffles their Point Cards face down, and flips the first three face-up. The player with the highest total when adding their three cards together wins. Repeat this process if the players are still tied.

Try playing the game with face card piles sharing number cards with those face card piles next to them. This makes for a tighter game space and a quicker game overall, but it can be very unpredictable in terms of the outcome.

Try playing the game with face cards not collected until all face cards have been surrounded. This increases the competitive nature of the game, and increases strategy by allowing astute players to “count cards” more easily.