ATTENTION: If you are the sculptor for these buildings (or if you know Craig and can put him in touch with me or me with him), please contact me! THANKS!

At Tennessee Game Days 9, the first game I sat down to play on Friday was Acquire, an ingenious real estate trading and speculating game that’s equal parts Bingo and Monopoly. The end result is brilliant, and although I came in firmly at third out of three players, I’d say I had a solid run and an outstanding introduction (one of the guys I played was nationally ranked at one time, believe it or not).

The best thing about it? The set I played was custom-sculpted and modified. Honestly, I don’t know how anyone would want to settle for less now that I’ve seen it. Long story short: incredible detail was put into these hand-crafted, hand-painted buildings that stand in for paltry cardboard chits. All were made with wood, decorated with model-railroad people and vegetation. Everything fit neatly in the custom-built game grid on which the game is played.

It was EXCELLENT! I’m totally spoiled now. I’d love to see the game on the table again, but I’m afraid that unless I play this same set again, the magic would be gone. However, any game that has the staying power to stick around on gaming tables as long as Acquire has – 52 years and counting – definitely has something going for it.

Have a look at some of the pieces below. If you know what the original pieces look like, then it’s very likely you’ll be amazed too. Click on the image to see a larger size.

The board was made up of a raised grid of individually-labeled cells. As the game progresses, players draw chits that indicate where the next piece is to be played. 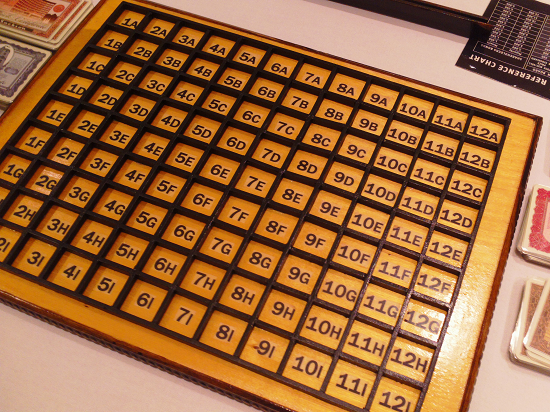 All the stock certificates were laminated on both sides to protect them from wear. We lined them up on both sides of the board along with their hotel headquarters to indicate what was available for placing/purchase. 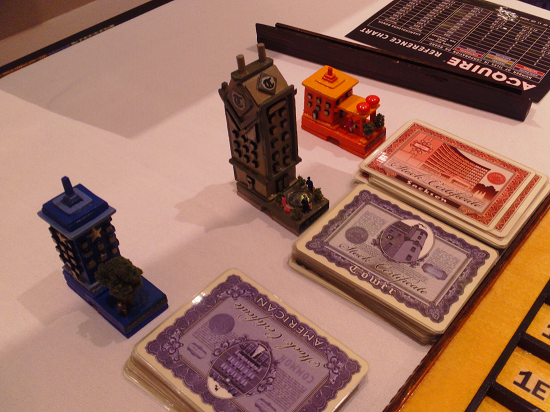 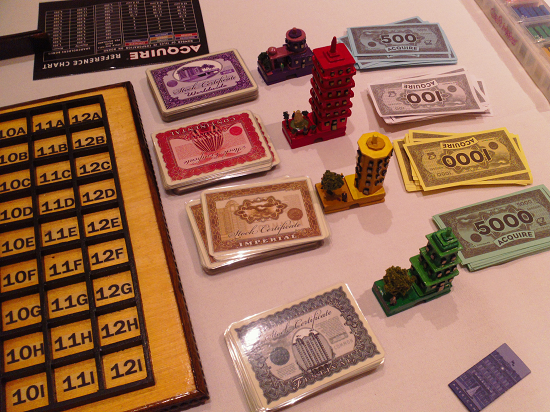 Each of the headquarters was individualized by colour and decor so players could tell what hotel was where. 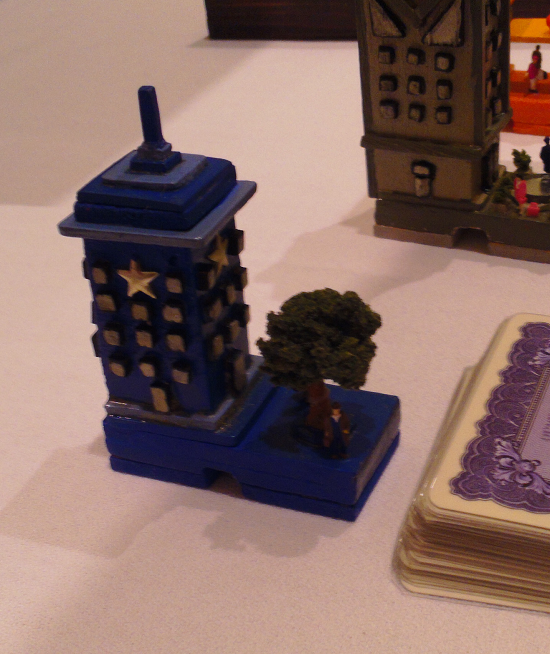 The “cheaper” hotel chains were much smaller than the two “executive” hotel chains, which would net the majority stockholders some serious cash as time went on. 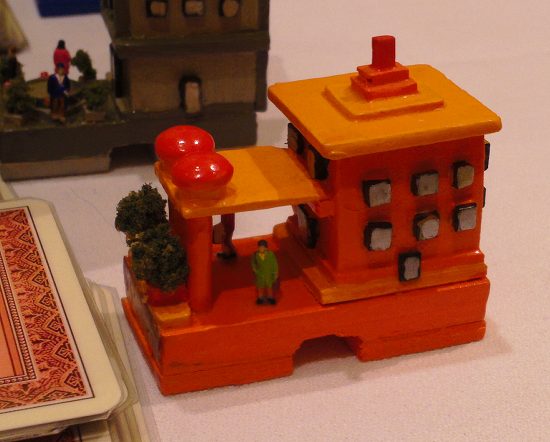 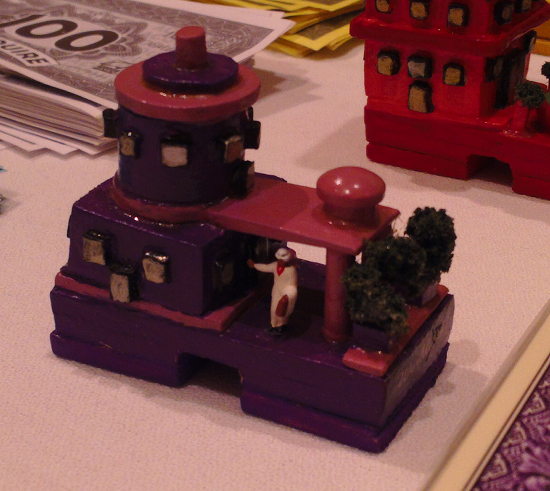 Here’s one of the fancy-shmancy executive hotel chains: multiple stories, business-class clientele, and a nifty fountain out front. 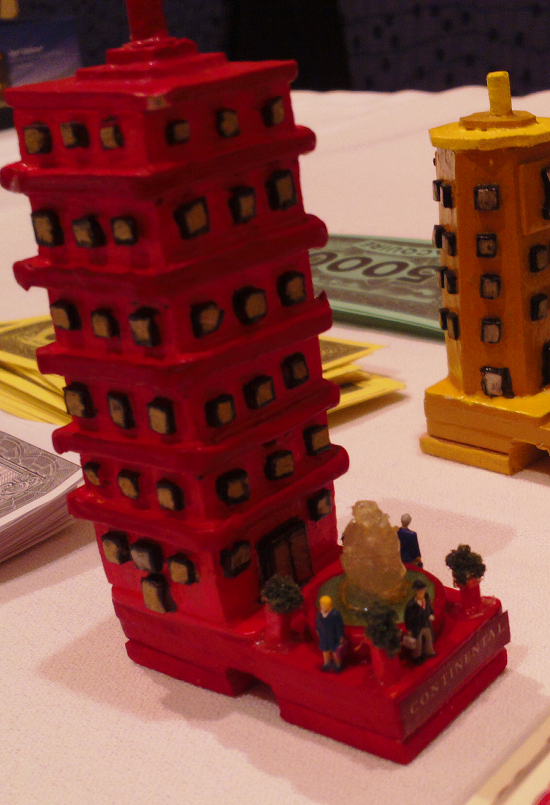 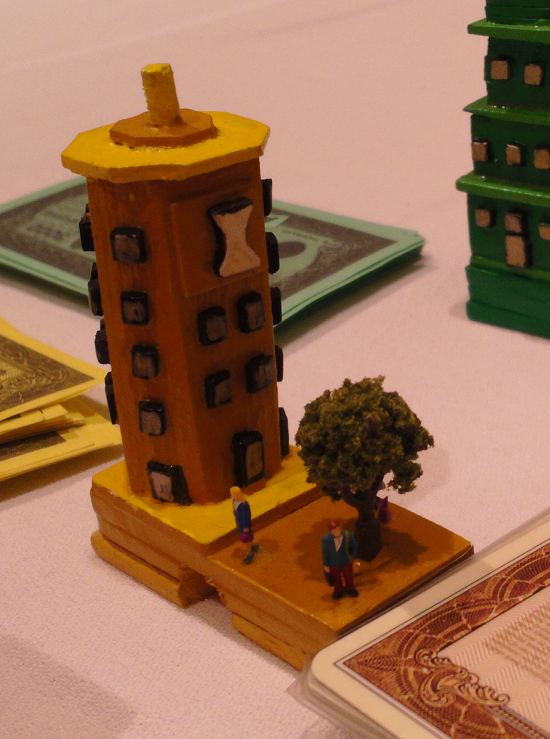 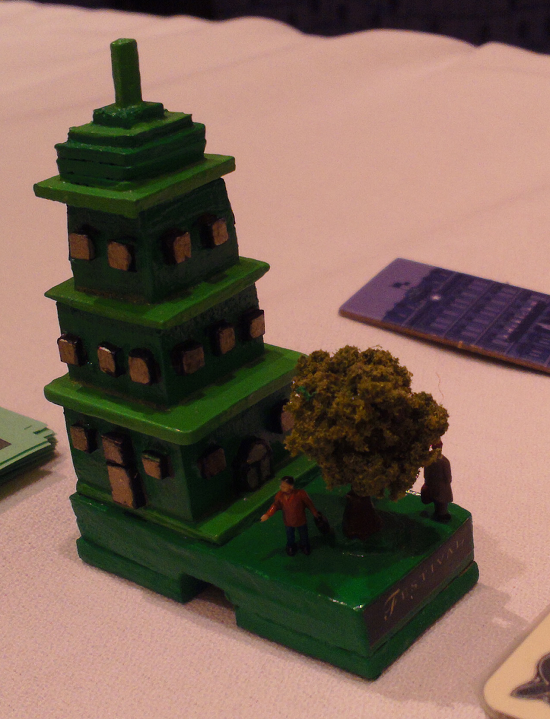 Here are a couple shots of the game in progress… 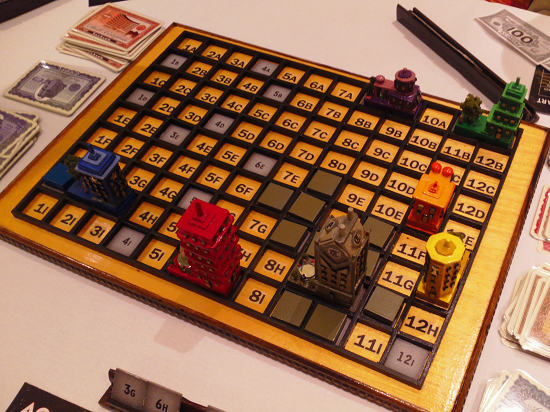 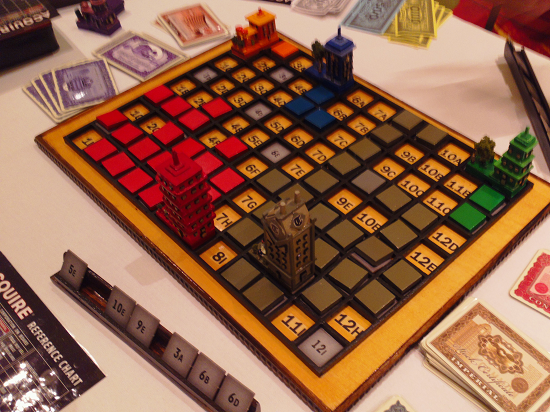 Thanks to Craig for sharing his talents, and for making my introduction to a classic tabletop game such an inviting experience.