We’ve had a fantastic time at Tennessee Game Days IX so far…! Not only have I had a chance to play such excellent games as Sid Sackson’s Acquire, or the new Caverna by Uwe Rosenberg of Agricola fame, but I’m hosting game design workshops and prototype showcases this time around.

Friday evening, I led a group through the basics of game design, and had a blast. We discussed three essential ingredients to games: components, rules, and theme. I gave away a bunch of extra bits I had laying around on my game shelves and let the participants have at it with their ideas. To show how easy it is to start designing your own games, I led an exercise where all the participants put together their first-ever race-to-the-end game, using components and materials I provided specifically for the event.

Finally, we capped off the evening with some playtesting and instant feedback sessions on the new designers’ prototypes, putting the rapid iteration process in full effect while having a lot of fun. Oh, and I also learned a bit about a parasitic fungus that burrows into ant brains and drives them to climb to the tops of flowers…All in all, an excellent experience! I’m hoping everyone had a chance to exercise their brains and see some of their ideas in action. Judging from the thanks I received and feverish activity I witnessed at the table, all signs indicate it was a success! 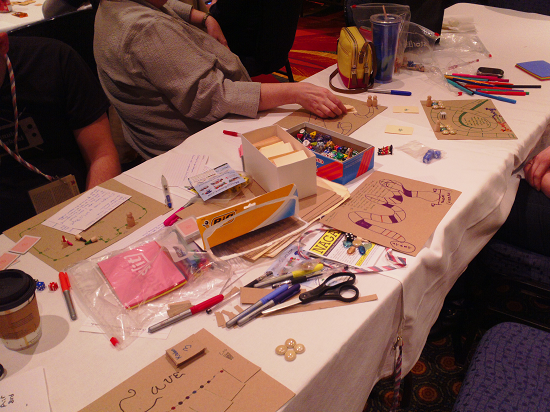 Designers hard at work at the inaugural Game Designer’s Workshop at TGD 9.