Free Game: This Is Not A Drill! – 2018
Our free mathematics game about stabilizing a Nuclear Reactor is available FREE on Teachers Pay Teachers (because math). Check it out, download it, and leave a glowing review for it HERE! 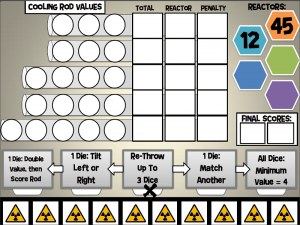 UNPUB 7 – 2017
We’re showing Saturday evening and Sunday morning at this year’s UNPUB unpublished games convention. Hitting the table on our behalf will be the latest version of our space-scrapper card game Scavengers as well as Merchant, Monarch, Marauder: a pick-up-and-deliver game where players deliver life-giving trees to desert towns, gaining rewards and dodging hazards thrown in by other players.

UNPUB 6 – 2016
Let-Off Studios had a blast showing both Sky Mappers and Mole Majority at Unpub 6 in Baltimore, Maryland. It’s always cool to meet other designers and see their work, as well as show our games to people who have never seen them before. Thanks to Darrell and his crew for putting on a truly phenomenal event for all of us aspiring designers!

NORTH AVENUE KNOWLEDGE EXCHANGE – FEBRUARY 2016
LET-OFF STUDIOS had a blast at the North Avenue Knowledge Exchange! Stephen led a workshop titled Making Tabletop Games to Change The World. Participants discussed game-making, played a round of a prototype card game designed specifically for this event, reviewed material about game design and how to theme games on social issues important to the designer. Finally, everyone took home their own blank card deck, some instructional and information sheets, and some inspiration to make their own games.

To illustrate some basic concepts of game design and typical mechanics, we’ve developed some original games exclusively for this event! Each can be made with a single deck of 54 (or fewer) blank cards and support somewhere from 2 to 4 players. Game instructions below: 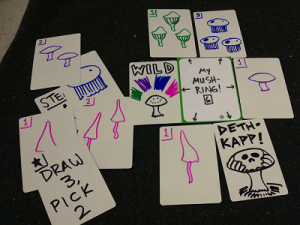 Mush-Ring!, a draw-and-play, take-that card game about growing a ring of mushrooms. 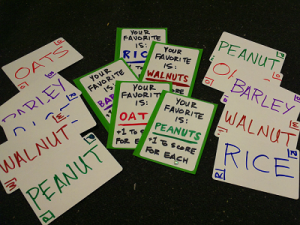 Nuts and Grains, featuring card-drafting and an open and flexible trade segment for high player interaction. 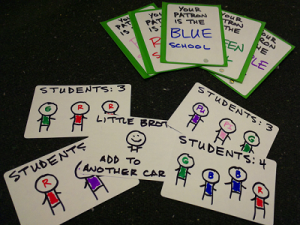 We design tabletop/board games at let-off studios both for entertainment as well as training opportunities/organizational needs. Below is information about our prototypes (games we want to publish), game concepts (finished small games, game mods, and print-and-play offerings), and essays on various aspects of game design.

FREE DOWNLOAD: PERSPECTIVES ON GAME DESIGN
I collected info from several fellow designers on creating the Perspectives on Game Design zine. It was distributed for free to the designers I interacted with at Tennessee Game Days IX.